On Tuesday 18th February Dr. Catherine Preston gave a seminar, including some of the latest Arthritis pain alleviation data, to the Communication and Learning (CCL) research team at the University of Lund, Sweden. CCL is an exciting multi-disciplinary research group that is trying to bridge the gap between different faculties in science and humanities. More information about the group can be found here (link). 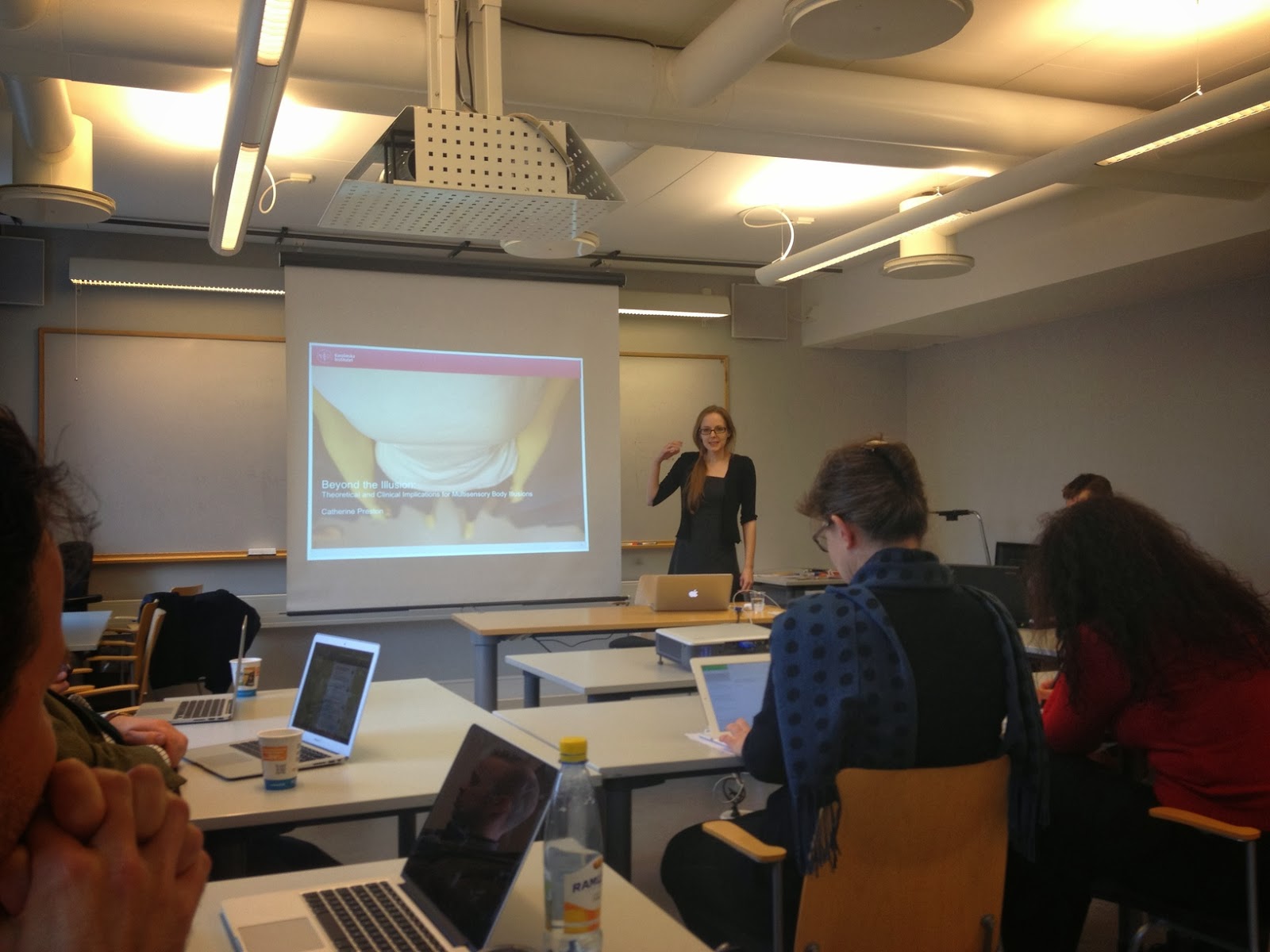 Data collection for the latest part of the Arthritis project finished last year, but this was the first opportunity to present some of the new results and discuss implications for multisensory illusions with a very welcoming and receptive audience (link). 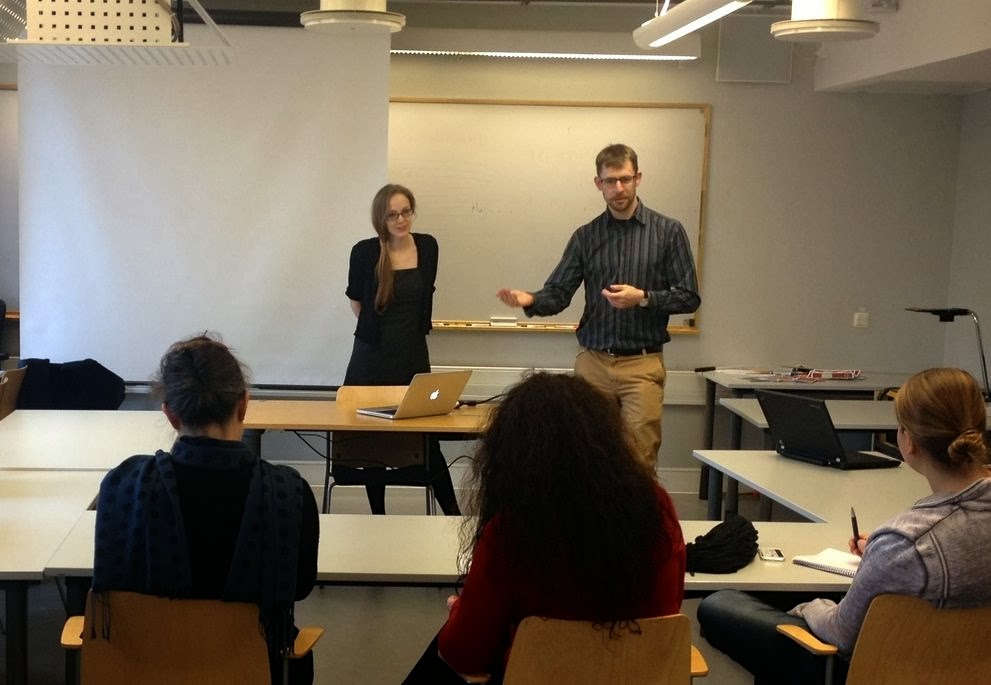 During the seminar Catherine also presented some of her more recent (non-MIRAGE) work linking body perception with emotion and eating disorder psychopathology, which she has completed whilst working in Sweden with Prof. Henrik Ehrsson. To read about her recent work please see the latest publication in PLoS One (link).

Posted by Catherine Preston at 05:28 No comments:

The Autism Research Team (ART) have been conducting an exciting new MIRAGE project funded by the British Academy/Leverhulme small grant scheme.  The team investigated whether children with and without autism spectrum disorders (ASD) respond to multisensory illusions in the same way and whether susceptibility to illusions changes with age.  MIRAGE illusions rely on multisensory integration which is important not only for allowing us to perform simple movements (e.g. pointing) but also for developmental processes. These include distinguishing between the self and others, and developing a sense of body ownership.  Such processes are necessary for the development of more complex social behaviours, including empathy and imitation, which individuals with ASD have difficulties with. Research exploring multisensory integration in ASD could give us a better understanding of the social problems in autism and how these could be remediated.

Participants aged between 5 and 15 years placed their right hand into the MIRAGE system and saw two images of their right hand on the screen (the supernumerary limb illusion). One image was always in the same location as the real hand while the other was to the right or left of the real hand.

Children felt their hand being stroked with a paintbrush and saw one hand being stroked in time with the felt strokes, while the strokes on the other hand were delayed. A picture then appeared above each hand and children were asked which picture was above their real hand.

In past experiments, adults nearly always state that the hand being stroked in time with the felt strokes (the synchronous hand) is the real one, even when this image is not in the same location as their actual hand. This is due to the adults integrating the visual and tactile information, creating a strong sense of ownership over the synchronous hand. 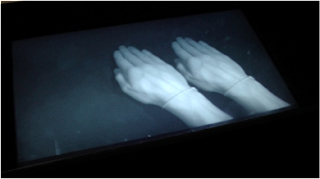 In the current experiment, children aged between nine and 11 years showed similar results to adults, as did seven and eight year olds, but less strongly than the older children. Interestingly, four to six year olds did not chose the synchronous hand significantly more often than the asynchronous one. This suggests that the multisensory integration necessary for this illusion to occur develops throughout childhood.

Overall, children with ASD tended to choose the synchronous hand. This is in contrast to previous research which has suggested that individuals with ASD may be less susceptible to multisensory illusions such as the rubber hand illusion (RHI). In the RHI, ownership of a fake hand is induced by providing temporally congruent seen and felt touches on a fake hand and the participant’s real, hidden hand respectively.

These contrasting findings could be due to the MIRAGE illusion requiring less language comprehension, attention and imagination than the RHI. To investigate this, further MIRAGE experiments are being conducted as part of a PhD by Katie Greenfield, a member of the ART, with a larger number of individuals with Autism.

Post written by Katie Greenfield
Posted by Catherine Preston at 09:18 No comments:

The MIRAGE lab is pleased to announce another publication using the MIRAGE system. The research article is called, "Spatial compression impairs prism-adaptation in healthy individuals" (link) and uses MIRAGE to compress the visual workspace in order to model Neglect prism adaptation performance and is published in the Journal Frontiers in Human Neuroscience.

Neglect is a disorder that can occur following brain injury, which causes the patient to have reduced awareness of the left side of space. 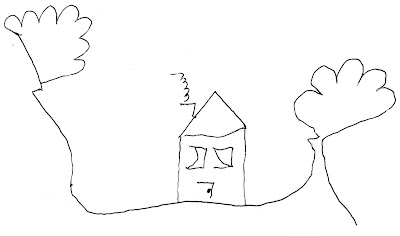 Wearing rightward optical prisms over your eyes makes everything appear to be to the right of where it really is. When you try to reach and touch something you miss to the right. After a while you get used to the prisms and can reach accurately again (adaptation), but if you take them off you suddenly start missing to the left for a while (the aftereffect). The processes of adaptation and the aftereffect can help to reduce visual neglect. Neglect patients do not adapt to prisms in the same way as healthy people. This may be due to an abnormal compression of their visual workspace.

Research of this kind can help us to further understand changes in the brain that cause the disorder and also help understand mechanisms underlying temporary restoration of awareness following prism adaptation.


Posted by Catherine Preston at 00:55 No comments:

Below is a short post written by one of the student volunteers who helped out at the Big Bang Fair. It is a nice example of how working with MIRAGE can be fun, not just for those experiencing the strange illusions, but also for those delivering them:

Last March Roger Newport took us four lucky 2nd year Psychology students to London to represent the Psychology Department of the University of Nottingham and the British Psychological Society at the Big Bang Fair 2013. The Big Bang Fair celebrates science by aiming to reach out to and spark interest for science in school children of any age and year. High-profile firms, such as “e.on” and “l’oreal”, university departments and our lovely little, but hugely successful BPS stall provided interactive demonstrations of experiments throughout the whole day over an extended weekend.

Roger Newport introduced his invention, the MIRAGE box, to the fair and we four 2nd years were trained to demonstrate and explain bodily illusions with the help of the machine. While the machines were visually seamless compared to the flashing lights and bright colours other stalls had to offer, our stall increased in popularity solely by word of mouth that the bodily illusions that we demonstrated were “creepy”, “weird” and simply “amazing”. The simple finger stretching illusion, in which a person sees an image in the box of his finger being stretched, while we simultaneously pull at the finger, results in an actual feeling of a stretched finger. Even though one knows that one’s finger is not actually being stretched, one’s brain is fooled into sensing the stretch every single time. While this demonstrated a fun side to psychology, which also reached out to the younger children, we could address the older ones by explaining that this is an example of how our brain’s representation of the body is simply made up of what we see and feel and that, on a more serious note, the finger stretching illusion has been found to temporarily reduce or eliminate pain in patients with arthritis.

It was most rewarding to see the amazement in the children’s eyes and observe them trying to peak into the box to see whether their finger actually had been stretched. Additionally, it was a wonderful experience to be able to share our passion for psychology with the university students of tomorrow, especially sparking interest in those young eager minds to whom psychology was something completely new.

It was an experience, I would not have wanted to miss and a huge thank you has to go to all involved in making this an incredible experience, but especially to Roger Newport for giving us this opportunity and trusting us to adequately represent his invention. 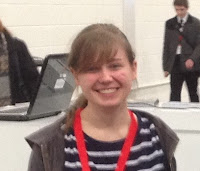 MIRAGE at the Big Bang Fair

The Big Bang Fair is an annual event aimed at engaging young people in science and technology. The fair is open to primary school children from across the UK and this year it was held at the Excel Arena in London between March 14th - 16th. The MIRAGE lab were there to join in the fun!

It was a huge success and even with two MIRAGE systems it was difficult to keep up with demand. Over the course of the fair the team were visited by thousands of children, parents and teachers as well as other exhibitors who also wanted their finger stretched! 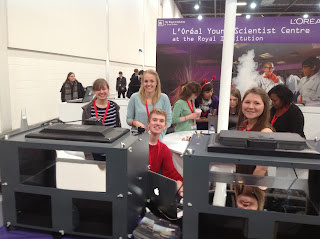 Louisa Morrison, Sarah Johnson, Mark Carey and Hannah Strange (pictured above from left to right): second year student volunteers helping to demonstrate some of our most popular illusions.

Posted by Catherine Preston at 01:07 No comments:

Haika was the guinea pig for our latest bit of fun research, although you see from the way her expression changes at the end of the video that she didn't find it all quite as much fun as we did. You'll have to forgive the shaky hand on the camera, but Tasha couldn't stop laughing while filming. We'll explain more about the illusion another time, but it's all part of the grand plan to work out exactly what we can do to change and mould body representations.

Post by Dr. Roger Newport
Posted by Catherine Preston at 06:23 No comments:

The new MIRAGE100 goes to the Netherlands 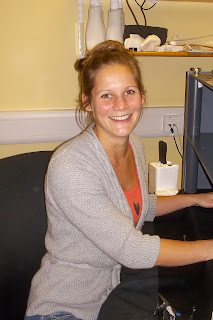 This is Haika from Utrecht. She and Alyanne visited the lab in Nottingham to get some training and to pick up their new system, the MIRAGE100 - faster than before with only a 10ms delay between image capture and display. They loved all the illusions and even came up with a couple of their own. Next week we'll post a video of Haika's reaction to one of our latest creations.
Posted by Catherine Preston at 05:54 No comments: